The fourteen scattered bee yards are located in a coastal area that is still agricultural and benefits from extensive protected wetlands and forest. Most of the bee yards are on farms, some in nurseries and gardens.

Informed by her biodynamic training, Mary allows her bees to raise their own queens, uses no antibiotic treatments, leaves the hives stationary (while she does the moving around!), and never feeds pollen substitute, sugar water or high fructose corn syrup.

These practices have encouraged bee health and vitality, essential factors as they respond to threats from Varroa mites, tiny parasitic insects that feed on bee blood and vector many fatal bee diseases. Mary treats her bees for these mites with vaporized oxalic acid during the broodless winter period. Oxalic acid is already present in the beehive, in far lower concentrations (and also in many vegetables as one pound of carrots contains sufficient oxalic acid to treat one hive). Oxalic acid treatments, used for decades in Europe, were approved by the EPA in March of 2015.

Mary last brought in “outside bees” in 2005 when she purchased fifteen hives from Kirk Webster, a respected Vermont beekeeper. These hives had not been chemically treated for Varroa mites since 2002. Subsequently, bee stocks are established from her hive splits and swarms (and an occasional rescue from disenchanted beekeepers).

In recent years beekeepers worldwide are annually losing as many as 75-100% of their bees, and the national average is well over 30%. Meanwhile, in nine of the eleven years Mary has been keeping bees on the East End, her winter losses average only 6%. She attributes this to employing methods that put the bees’ needs first! 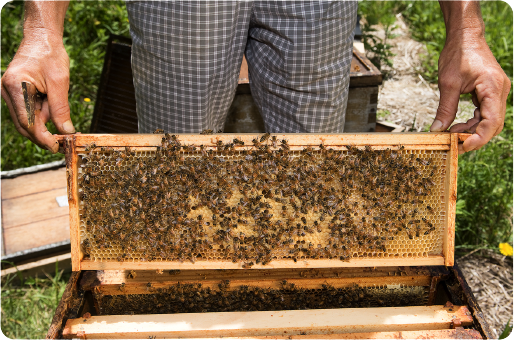 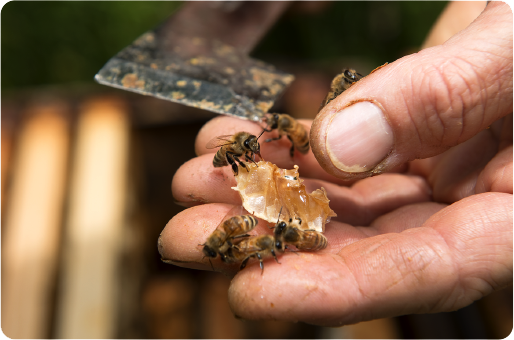 How are the bees today?

Mixed, we would have to say.

Annual losses of 15% were once the industry standard. However, since the advent of Colony Collapse Disorder (CCD) first identified in 2006, losses have ranged from 30-100%, with a national average around 35%.

On a brighter note, our girls went into winter especially strong this year, and the vast majority is faring particularly well.

You can help all by keeping them in your thoughts, and being aware of the problems.

How can I help the bees where I live?

I have bees in my yard/tree/ house/shed roof. Can you help?

Swarms are temporary visitations of bees on their way to a permanent home. They do not present an immediate danger when left alone. They typically linger a few hours to a few days. We are happy to come and collect these when we can. However, we lack the time and expertise to remove more permanently established hives living in walls or eaves of a house. Local beekeeping clubs are often a good resource for assistance. See links for who might help in our area.

I want to get a hive. Can you help?

We don’t currently offer beginner courses, but will occasionally offer short courses for beekeepers that have some experience. Watch this site of developments. Meanwhile, before attempting to keep bees, please learn and read as much as you can. Beekeeping has never been more challenging, with experienced beekeepers suffering extensive, and at times, demoralizing losses. Good preparation allows for good execution; both increase success and the bees’ survival.

I want bees, but don’t want to manage them myself.

We have managed bees for individual clients on rare occasions. There are numerous factors to consider and the decision is made on case-by-case basis.

Will you come and speak to my school/group/office?

Bees’ Needs is committed to public awareness and education, and yet, we must temper enthusiasm for outreach and cannot accept every invitation. Talks cater to people of all ages and take place in a variety of settings. However, in-season work demands take precedence over everything, except possibly sleep.

Can I visit your farm?

Our bees are dispersed over 14 different locations, allowing the bees’ vital work to reach a variety of farms that require their pollination services. Since almost all these locations are privately held, we can’t accommodate individual requests for visitation. Unless there is an owner-sponsored or public event, we do not conduct tours of bee yards.